I know, I know, one of those lines you don’t bother to think about, because you’ve heard it a million times. But it doesn’t mean it’s not true, and it doesn’t mean we shouldn’t all go and read “In Memoriam,” although we may be some time – it’s longer than you’d think.

Meantime, take a look at this loved lost one. Mina, lovely Mina.

Mina appeared in my Instagram feed a month or two back – on the first anniversary of her death, in a post from her owner that made my eyes begin to fill. I can’t quote from it, not without rereading, and I daren’t trust myself. It may be better to have loved and lost, but it doesn’t half hurt in the losing. Even a year on.

Better to dwell on happier thoughts, such as that smile, for one thing, and that glimpse of boundless joy that that first photo gives. Quite apart from the delightful rug she has styled herself upon. A dog with a smile to die for and a colour palate to match.

Mina belonged to an embroiderer who lives across the Atlantic – Random Acts of Amy – substitute Kindness for Amy, and I guess you’d have the measure of her.  One of Amy’s random acts of kindness over Thanksgiving (which I had understood was meant to be a holiday, though a holiday that enslaves all its celebrants to the kitchen for hours of preparation beforehand, and to the sofa, for hours of over-stuffed groaning afterwards) was to collate a long series of articles on embroiderers #ThankStitching, to bring their work (and mine) to wider attention. It must have been a herculean task.

And so, when I saw this picture of Mina, I was inspired to a random act of Amy of my own, and offered to make a portrait of her Mina.

It’s a celebration of a loved lost one, of the kindness of makers, and, to be honest, of the continued existence of makers, I suppose. After years of seeing my crafty habits as something of an oddity, a secret, semi-humorous relic of a by-gone age, I suddenly find myself in the company of dozens, hundreds of makers and embroiderers, each more talented than the last. I have known nothing like it since my childhood. Then, illness and a day off school, could find me whisked off to a meeting of the Embroiders Guild, or my mother’s latest sewing or quilting class, where I would be installed in the corner, to mess about with packets of embroidery silks, and be class pet.

And here I am again, messing about with my cotton reels, in my little corner of Instagram, that vast gathering of stitchers, that every day brings new swatches, new patterns and prints, new stitches and samplers, gold work, and stump work, and pretty much any work ad infinitum. It literally never stops – not so long as the wi-fi holds, and I love it.

Now, it’s all getting a bit Pollyanna-ish here. Time to get sewing:

I loved this stage of Mina’s portrait. And for one reason or another, she stayed pinned to my wall for a while like this, so I loved it a lot. There is something very, very pleasing about the way she bursts from the narrow confines of the Liberty swatch – her personality will not be squashed to fit 9 x 14 cm – well, her ear won’t at any rate. And then there’s that enormous nose, that seems to be poking out of the picture, though it’s a scrap of the usual black wool, ironed flat to the linen. 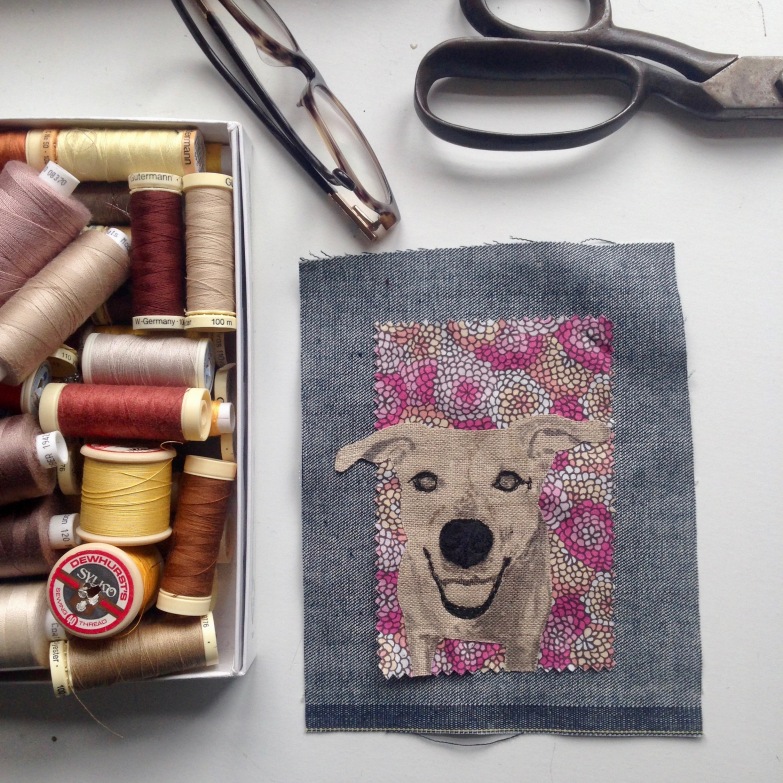 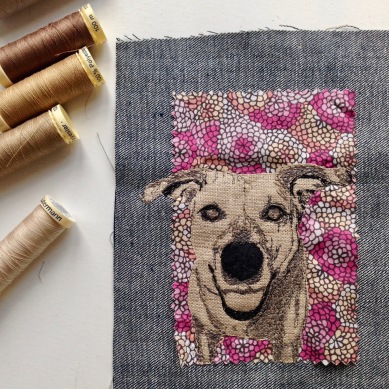 And highlights to finish: 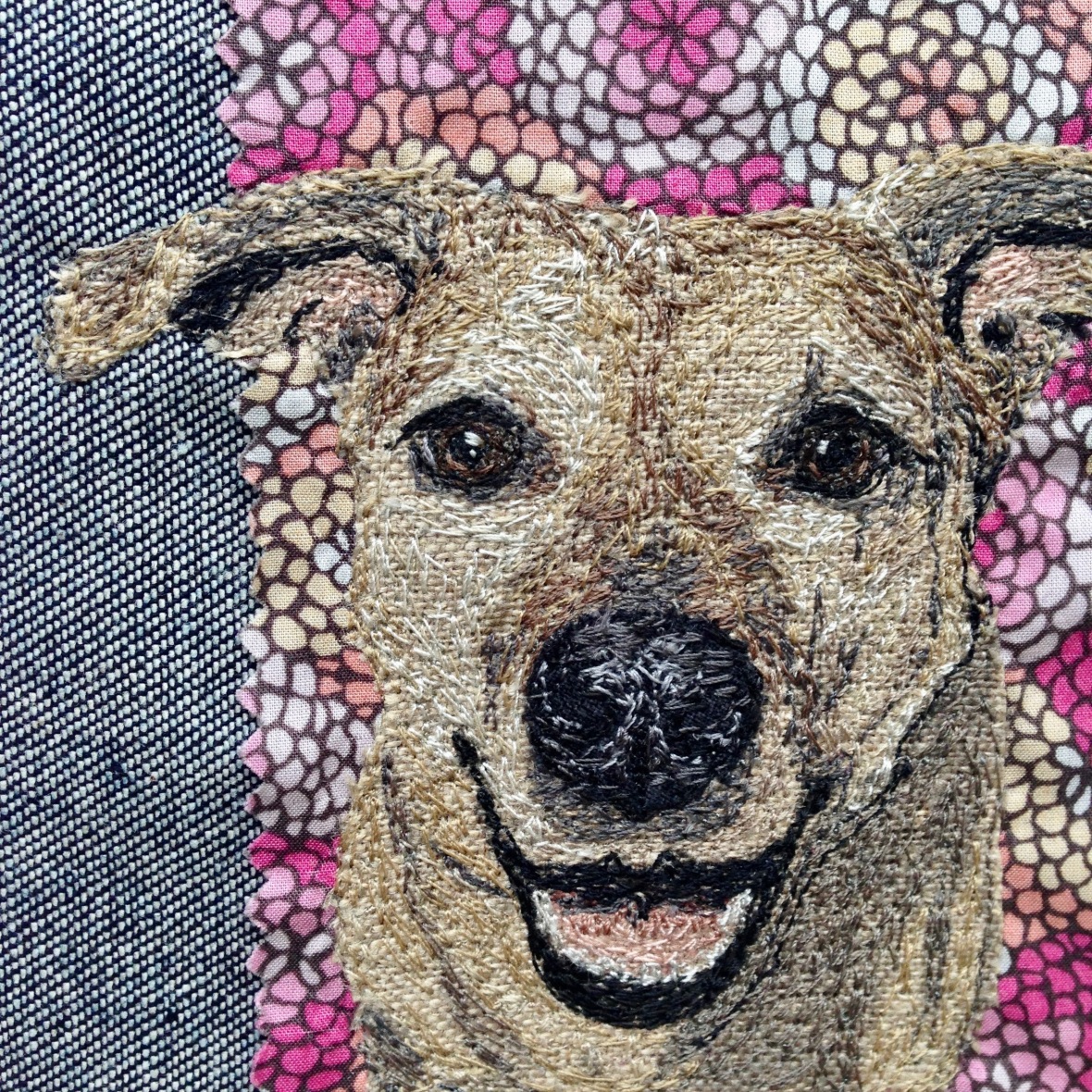 And at this point Mina went back into my wall, because the thought of parting with her was not something I wanted to think about, not for a day or two.

And then it was time to say goodbye. I packed her up, and off: 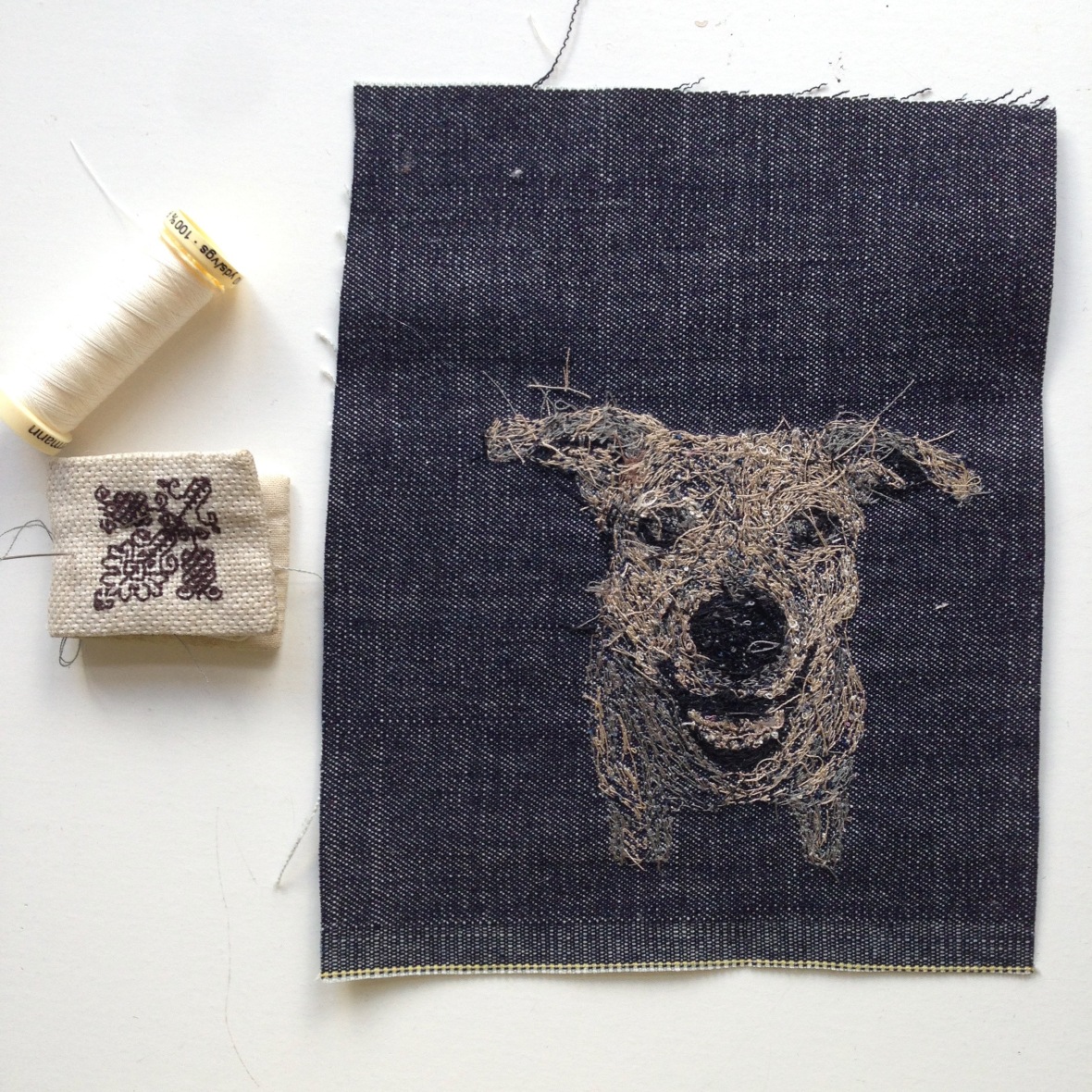 4 thoughts on “Mina – in memoriam”