Ollie walks with us to school most mornings. Well, he walks a few feet behind us to school most mornings, enjoying the full extension of his extendable lead. One can only presume it is his secret sorrow to have to associate with those so obviously beneath him, a burden he will carry with him to his grave. He is too well brought up to show this in any other way than the carefully preserved gap, but I am sure he feels it bitterly. (Apologies for the prose style today, I am currently glutting myself on the new adaption of Anne of Green Gables on Netflix, and can’t help myself.)

I suppose we should put Ollie out of his misery and cross to the other side, but we would lose so much by it. In particular, we’d lose the evocative and colourful imprecations heaped on his tardy head by his owner. I couldn’t list all the new words we have learned, and they’d lose everything in the translation from American English into English English, but I shall let you have my two favourites: turkey and punk.

Punk. Isn’t it just perfect. Perfect, in all senses, that is, except I fear, in its application to this little fellow. I mean, look at him:

anything less like Sid Vicious is hard to imagine. If he had been wandering down Carnaby Street in the late 1970s, he would have nipped off into Liberty, and bought himself a nice little tweed jacket, maybe a moleskin waistcoat, definitely a bow tie. Mohincans and safety pins, zips and bum-flaps? – that’s not really the Ollie I see.

Perhaps this is a pre-punk shot of Ollie. A shot of Ollie ready and alert before a walk, not dawdling behind during one. Perhaps it was one of those mornings he was sure of not seeing us. Or perhaps every day is just a new start for him with no mistakes, or annoying fellow-travellors in it (there’s that Anne-girl again).

And in the spirit of new starts, here is my Ollie enjoying his own start – we’ll call him Patch for this one:

Sometimes these opening appliqué-only shots look plain dreadful, and sometimes, as here, you can already see the character emerging.

Out with the paints:

But then I ground to a stop. The sense that something was wrong was nagging at me. It took a good bit of staring, till I realised I’d lost the head tilt. A quick repatch and we’re off – Ollie’s quizzical nature firmly in place now. That right eye was out by maybe no more than a millimetre, but what a difference it makes.

All done, bar the highlights: 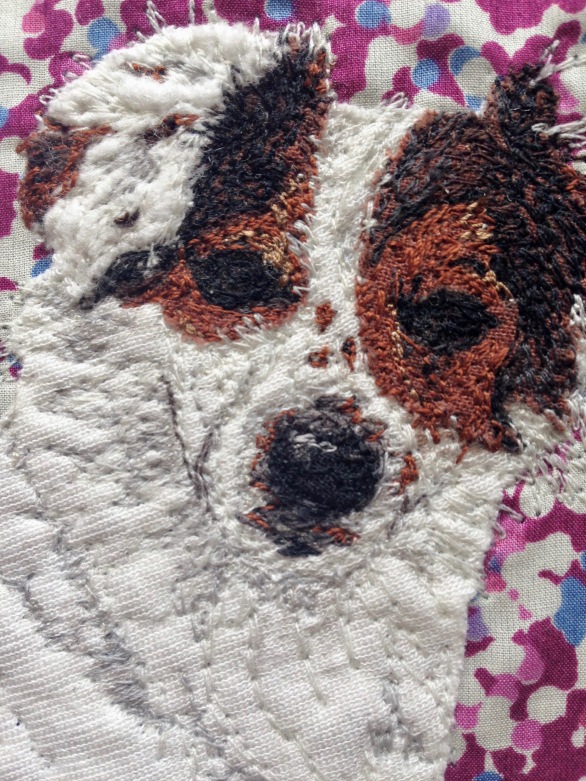 Isn’t he gorgeous. More Pretty in Pink than Dirty Harry, I would have said, but I’m not the one at the other end of the lead…

One thought on “Ollie”