The other day I was feeling a little flat.

[As a side note to illustrate both my character and that of my brother, I should come clean and say that the memory of our mother’s saying this belongs exclusively to him. I’ve just borrowed it for now. Personally, I don’t ever remember her saying this. I suspect I didn’t want to hear it, and was too busy stuffing myself with the cake I decided the universe owed me at the time (you probably know how well that turns out).  But my brother does remember, and swears by it, so I thought I’d give it a go.]

I decided to send something nice out into the universe in the shape of a free pet portrait offered up on Instagram. And what came of it, came pretty quickly in some very nice comments about what a kind gesture it was. I can report these without fear of my head swelling or anything, as the gesture was all my mother’s and brother’s and they were/are lovely people. Still, it was all rather lovely for me too. And lovelier still were the pictures people were sending in. If a parade of loved and loving pets doesn’t bring some cheer into a gloomy day you might as well give up. [You can see for yourself if you search #rocketfullofpie].

But as I started reading about the pets, I felt a tiny spark of panic. How would I ever choose? Sure, I might make one person’s day, but what about all the pets I turned down – why should they have to suffer the indignity of losing my beauty pageant? What if my nice gesture ended up in upsetting dozens of people. People who were perfectly happy before, but who now couldn’t look at their beloveds without wondering what was wrong with them. I know, I know, it was time to take a step back, have a nice cup of tea and calm down.

So I did. And I made a set of rules to myself. Well, one rule, viz: I would pick and make one picture that I fancied making. That was it. Someone would end up with a portrait, not through their pet’s superior beauty or merit, but as a result of my complete and utter whimsy, the end.  So I picked one pet, Boo, and immediately broke my first rule and picked another too (still sitting in a corner of my desk, waiting. He may be some time).

And here is random kindness pet no. 1: Boo.

And here is the story Boo came with that day:

which made absolutely no difference to me whatsoever, as I had made the rule that I would just pick from the picture, and nothing else (…hmmm, a likely story).

What a sweet face, and what heavenly ears.

I set off, and immediately grabbed a new piece of Liberty print I had on display in my conscious stash of material (the conscious stash sits neatly folded on the bookcase next to the desk. There is a lot of lovely Liberty in it. The unconscious, as is its wont, lurks about the place, and threatens to bulge out when not wanted). But maybe the unconscious had had a hand in that choice – because it pulled it out, cut and stuck it, and started painting before my conscious mind piped up to wonder whether such a busy print could ever, actually work.

What was I thinking, right?

hmmm. Best to push on quickly. And you know, in a certain light – if you stare long enough, you can sort of see the rabbit

After a touch of black sewing, to steady the nerves (barely visible – the best kind of first strokes), we were off: 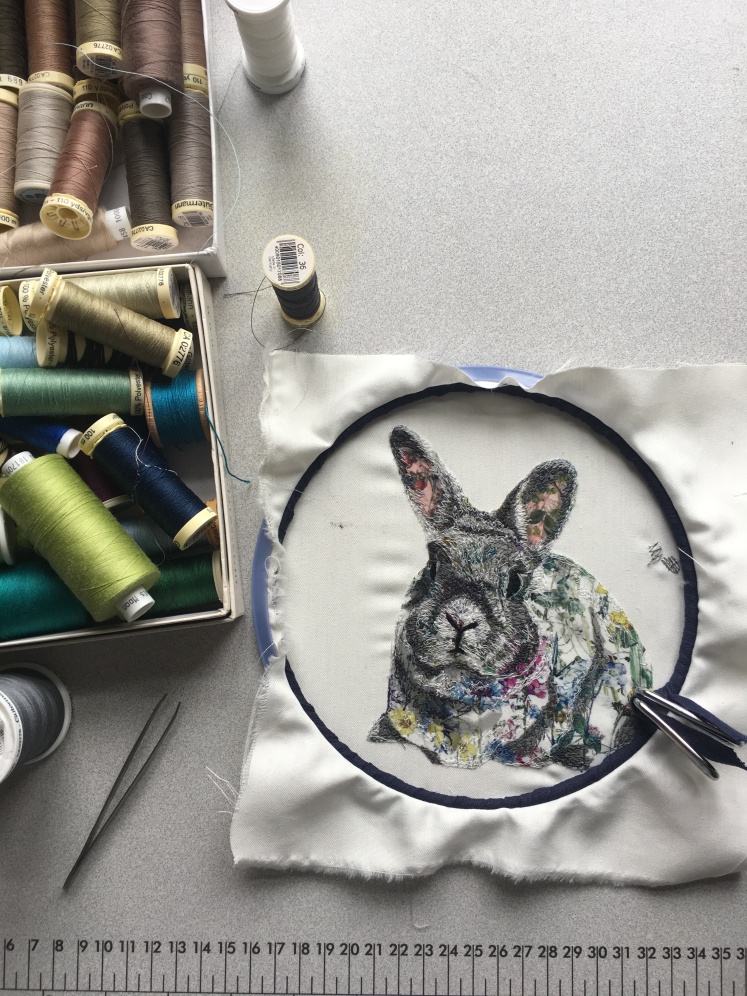 And voila – one fluffy bunny. Rather cute. I love the touch of pink flower snuffling beneath the nose, and the strawberries nestled in his ear.

Now all that’s left is the background, and then finally, the whiskers. But this is where we stop for now, as Boo’s owner gets to choose that. But here are some options, including a last, going off the rails one, which I still love, even after a decent night’s sleep. Have a look: 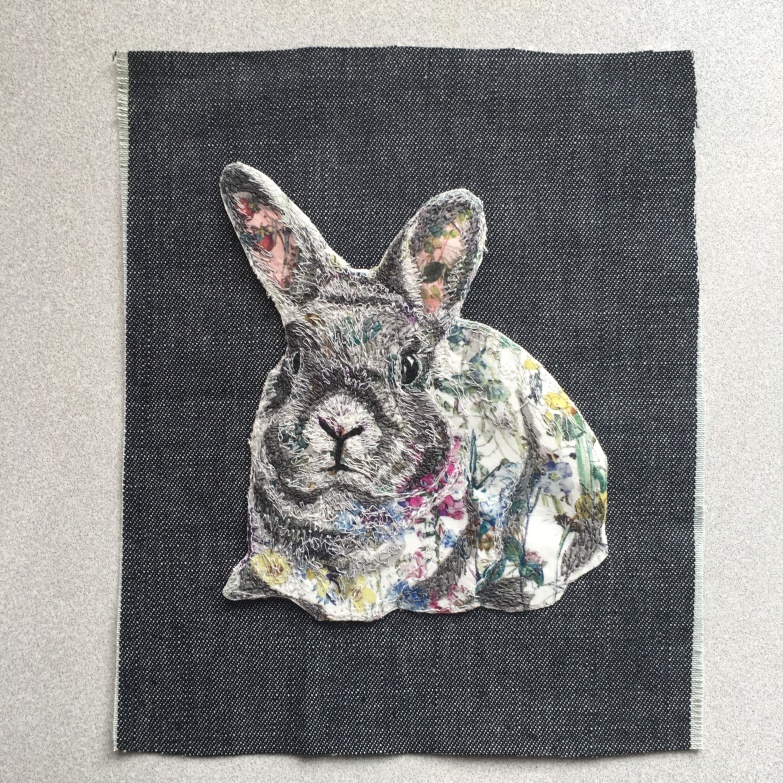 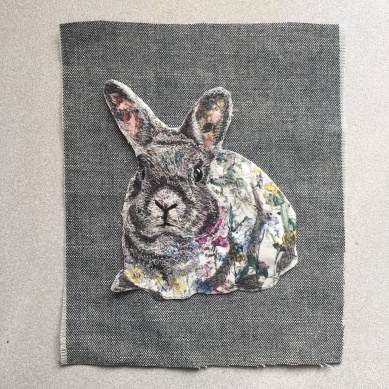 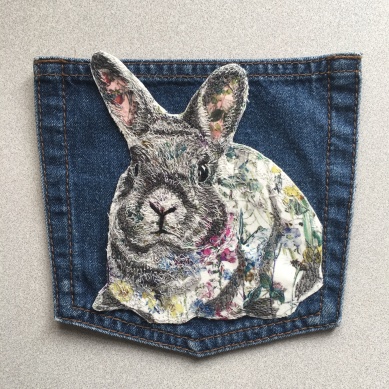 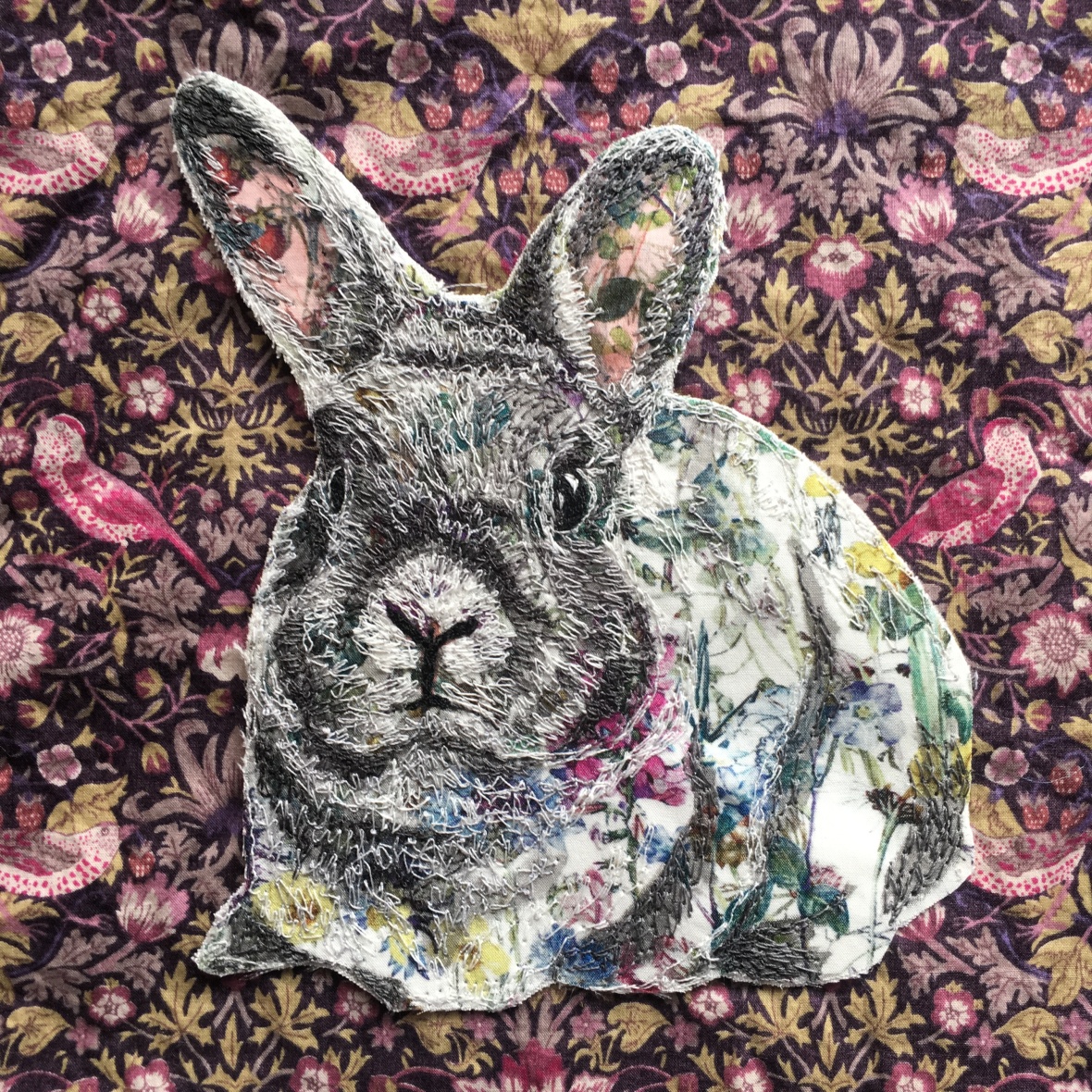 Because there’s no such thing as too much Liberty print, right?

One thought on “Boo”