OK – so, there’s a fair deal of haberdashery and nostalgia at the start of this post, before you get to the dog. Scroll down, if it’s not your thing, but if it’s not, it really should be. We’re talking Clothkits.

If there’s one other haberdasher that I have loved as long and as faithfully as I do Liberty of London, it has to be Clothkits. Founded in 1968, the company sold kits where the sewing patterns were printed directly onto the cloth, so all the home sewers had to do, was to cut and sew along the dotted lines. And Bob’s your uncle, you were suddenly the most fashionable kid in the playground. Genius!

I don’t know how much of it I wore as a child. My memory is far from reliable, and there are too few photographs from that time to be sure (my parents were of the one-roll-of-film-a-year school). But you don’t get to have such a deep affection for a brand, without running around in it day after day.

And for anyone who didn’t grow up wearing home-made screen-printed corduroy dungarees – this picture alone should be enough to get you googling: 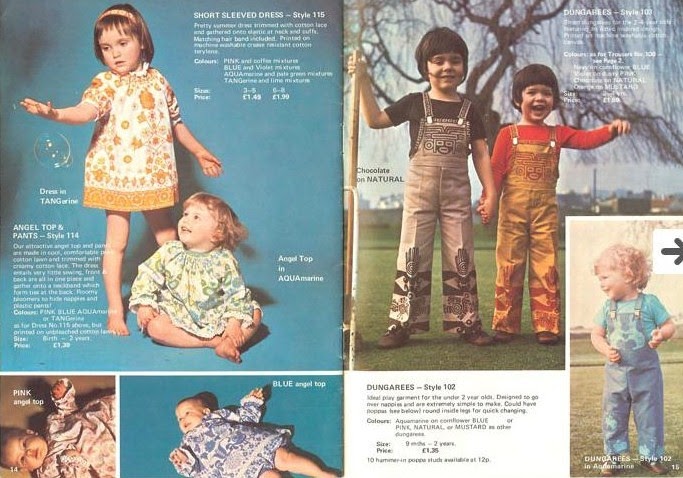 Just look how happy all those children look – well, maybe not the girl and baby on the far right, but those boys on the left are rocking that whole Aztec chic. And so did my son, in his lion print dungarees, when Clothkits was resurrected in 2008, and my daughter, in her corduroy bird print dress, and indeed, so do I still, in a corduroy bird print skirt of my own. (Though I did disobey the dotted lines, and sewed a more a-line skirt, so that the sewing lines are clearly visible on the outside. They’re iconic, after all!) 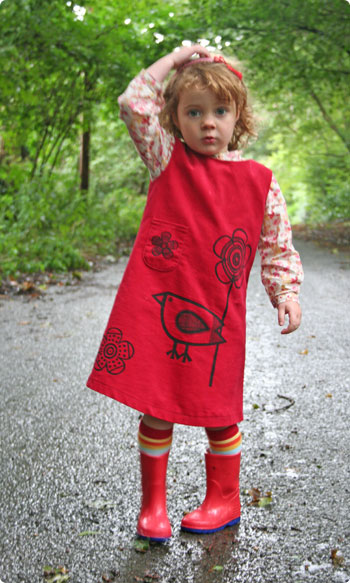 We’re nearly at the dog.

So, Clothkits is running a Liberty Scrap Fabric Challenge, selling packs of Liberty sample squares for £10, £5 of which will go straight to Children on the Edge. And then, if you can in the short time left now, you can send something you’ve made using the Liberty material  to be part of a silent auction at their I Love Liberty weekend on 21st-22nd May, and all the profits from that will go to the charity.

My subject was the photograph of an anonymous white dog from a website I found one day, printed off, and never found my way back again. It’s tucked in the background below.

White Dog from photo to portrait

He has the most noble of profiles, and looks like he has just stepped out of the pages of Heraldry.

The Liberty scrap is a silk jersey, I think – a little stretchier than my usual Tana Lawn, but it behaved well enough. Here is the dog, in the making. 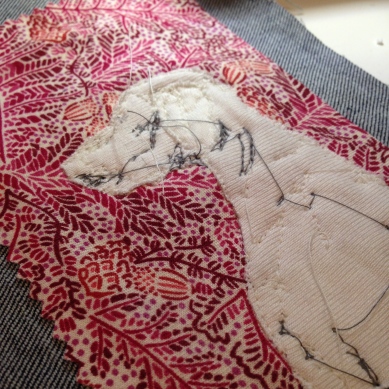 And here’s a little peek behind the scenes, and the out-takes:

round the back of White Dog, having a bit of a tidy up

And finally, White Dog himself appears. 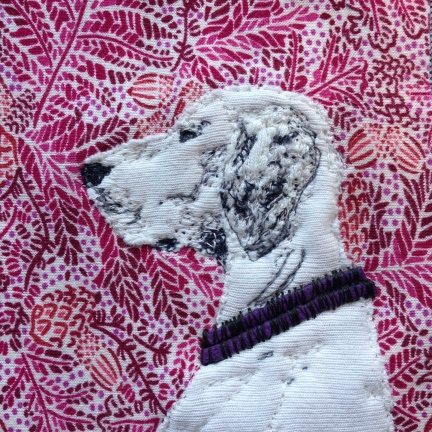 If you would like a bespoke portrait of your own pet have a look at the commissions page.

2 thoughts on “White Dog for Clothkits”